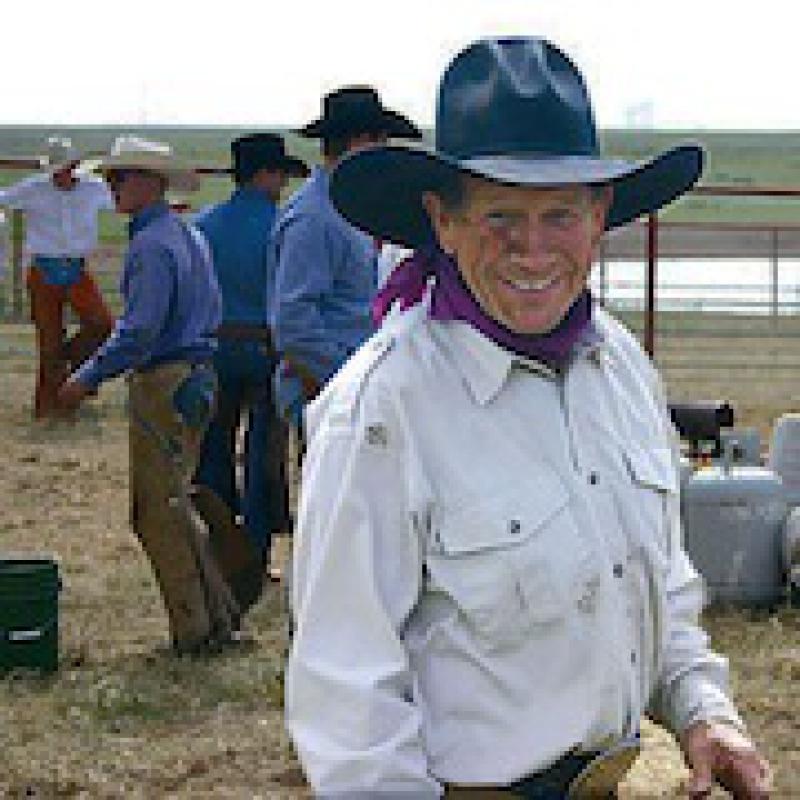 It has been said that T.D. Kelsey is a romantic, a realist and an inspired sculptor - all true. The more you get to know T.D. the more you respect him as a sculptor, a hard-working cowboy - a rodeo circuit cowboy, a rancher, an airline pilot, a conservationist and a wildlife protectionist. This is a man you want to know more about. This is art to add to your collection.

For the sake of his art, T.D. Kelsey has traveled to study wildlife in South Africa, India, Zimbabwe, Tanzania and New Zealand to name a few. His appreciation for nature and wildlife are represented in the keen-eyed observations he personifies in his powerful monumental bronzes.  There is a sense of immediacy to his handy-work. The texture and careful thought placed in how light and shadow will play across a horse and rider tangled up in a moment of chaos in evident. The work is confident and recognizable in what can only be described asThe Kelsey Style.

T.D. Kelsey grew up on a ranch near Bozeman, Montana. He rodeoed for many years in rough stock events and team roping. Following that, T.D. trained and showed his own cutting horses for several years. He worked as a commercial pilot for United Airlines until 1979 when he resigned to devote full time to his art.

His interest in, and promotion of, Texas longhorn cattle, maintenance of a wild horse herd on his ranch, passion for Africa and its wildlife, and concern for the conservation of wildlife worldwide have inspired many of his works. An avid traveler, he has visited many countries on every continent except Antarctica, drawing and sculpting people and animals from all corners of the world in addition to his western subjects. He is known for his intense, impressionistic sculptures that capture the spirit of his subjects.

Kelsey's work is found in private and public collections worldwide. He is a member emeritus of the Cowboy Artists of America, fellow of the National Sculpture Society and was honored with a one-man show at the Thomas Gilcrease Museum where he has work on permanent display. He also has sculptures on permanent display at the Pro Rodeo Hall of Champions Museum, the C.M. Russell Museum, the National Museum of Wildlife Art, The Colorado Historical Museum, The Texas Interpretive Center, the Buffalo Bill Historical Center, the Briscoe Museum, the Old Town Museum in Elk City, OK, Owensboro Museum of Fine Art and two museums in Spain.

At a one-man show at the 21 Club of New York City, 22 new works were a virtual sell out opening night. He also received the honor of having one of his sculptures chosen by the National Sculpture Society for the "Masterworks of American Sculpture 1875-1999" show, hosted by the Fleischer Museum in Scottsdale, Arizona.

He has placed several monumental pieces both private and public. These include "Texas Gold" located in the historic Stock Yards area of Fort Worth, Texas, "Briargate Mustangs" in Colorado Springs, Colorado, "Royal Challenge" for Cabela's in Sidney, Nebraska, "The Plainsman" for the Denver Buffalo Company in Denver, Colorado, "Change of Seasons" and "Swamp Donkey" at the National Museum of Wildlife Art in Jackson, Wyoming, "Testing The Air" in Montana, "Daga Boys" at the Saint Louis Zoo in Saint Louis, Missouri, "Swamp Donkey" located at Benson Sculpture Park in Loveland, Colorado, “On The Wind” at the Colorado Historical Museum in Denver, “Crossing the Catclaw’ in Abilene, Texas, “Free Fall” in the new Nancy Draper wing of the Buffalo Bill Historical Center, “High Plains Pair” at Owensboro Museum of Art, and one for the Briscoe Museum on The Riverwalk in San Antonio.

T.D. has also received commissions from companies and individuals such as Allen & Company Incorporated, American Express, The Coca-Cola Company, Jean and John Brittingham Park Springs Ranch, Meredith and Tom Brokaw, the Saint Louis Zoo, Mahlon B. Wallace III, and the Dearborn Ranch for both monumental and garden-size pieces.

T.D.'s work is available in very limited editions. Both finished castings and works in progress can be seen in the studio-gallery at his working ranch near Guthrie, Texas 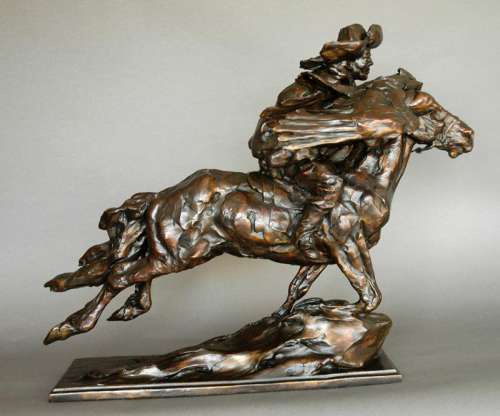 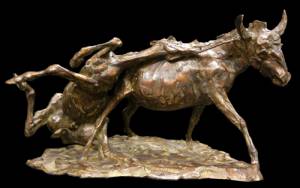 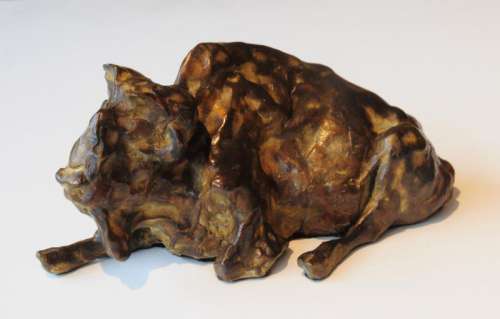 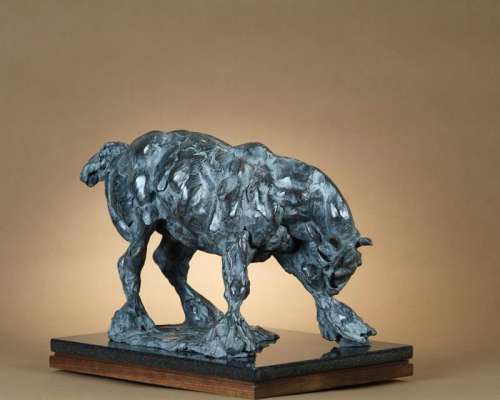 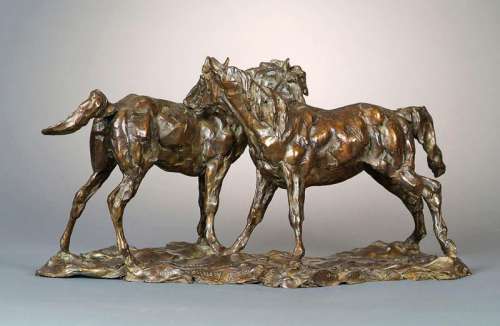 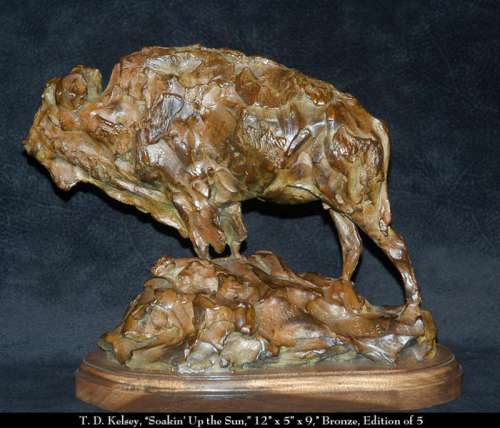 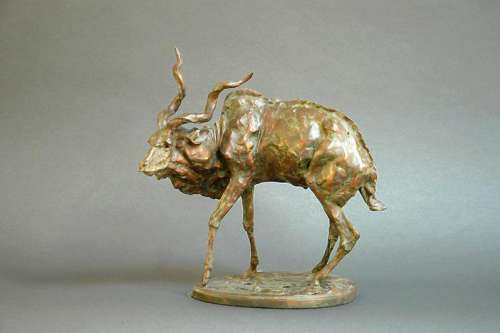 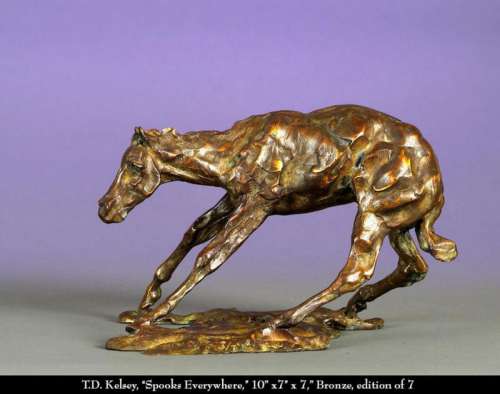