Bio Ann Gargotto is an accomplished oil painter, perhaps best known for her floral and still life paintings. She describes her paintings as “representational but interpreted with sensitivity, emotion and originality.” Ann strives to communicate her intense connection with her subject matter, often working for many weeks – or even months – to take a painting to its completion. Ann grew up in the San Francisco Bay Area. She initially became immersed in art in high school, winning the school’s highest awards. During those formative years she also attended the Sausalito Art Center, where she studied with seasoned San Francisco artists, and learned the foundations involved with oil painting. In 2007 Ann met Quang Ho, whom she credits with developing the fundamentals and principles of her artistic understanding. She has since studied with many nationally recognized oil painters such as Kevin Weckbach, Ron Hicks, Andrea Kemp and Michelle Torrez. In 2011 Ann was recognized by Southwest Art Magazine as “Artist to Watch”. Since then she has been accepted into many prestigious juried shows, among them the Oil Painters of America National and Regional Exhibitions, The Governor’s Show and Windows to the Divine. Ann has won numerous awards and is in private collections throughout the country. She strongly believes in participating in community events and mentoring fellow artists as a way of giving back to the artist community. Ann currently resides and paints in Denver, Colorado.

Artist’s Statement Robert Henri stated, “The object isn’t to make art, but to be in that wonderful state that makes art inevitable.” That statement so beautifully interprets the way I feel, and which is why my subject matter varies – I paint subjects that I become emotionally inspired by, and consider a painting finished only when I feel as if my emotion has been successfully transferred to the canvas. More often than not that is a bouquet of flowers or a bowl of fruit, although I often study the figure and nature. Oil is my primary medium, however charcoal and pastel are mediums I frequently study in. 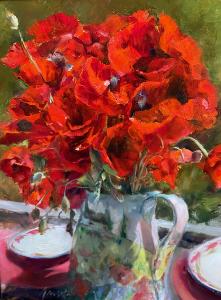