He began his art studies in New Bedford and as a youth sold illustrations to Life Magazine. In 1910, he enrolled at the Art Students League in New York City. He later went to the Grand Central School of Art where he worked under such noted artists as N.C. Wyeth, Dean Cornwell and Harvey Dunn.After completing his education, Delano maintained a studio in New York and worked as an illustrator.

He first visited the West in 1919, working as a hand on a Colorado ranch. At the age of thirty he homesteaded at Cataract Creek in Colorado, building his own dirt-roof studio. In 1933, he settled there permanently, but found the life hard because of the isolation, lack of art sales from being out of contact with his eastern market, and extreme winters in the high altitude.

A trip to the Navajo country was a decisive factor in Delano's becoming a western artist, there he found his favorite subjects: the Navajo people in their colorful costumes against the towering walls of the canyons of Arizona. 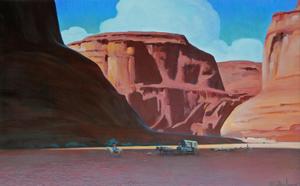