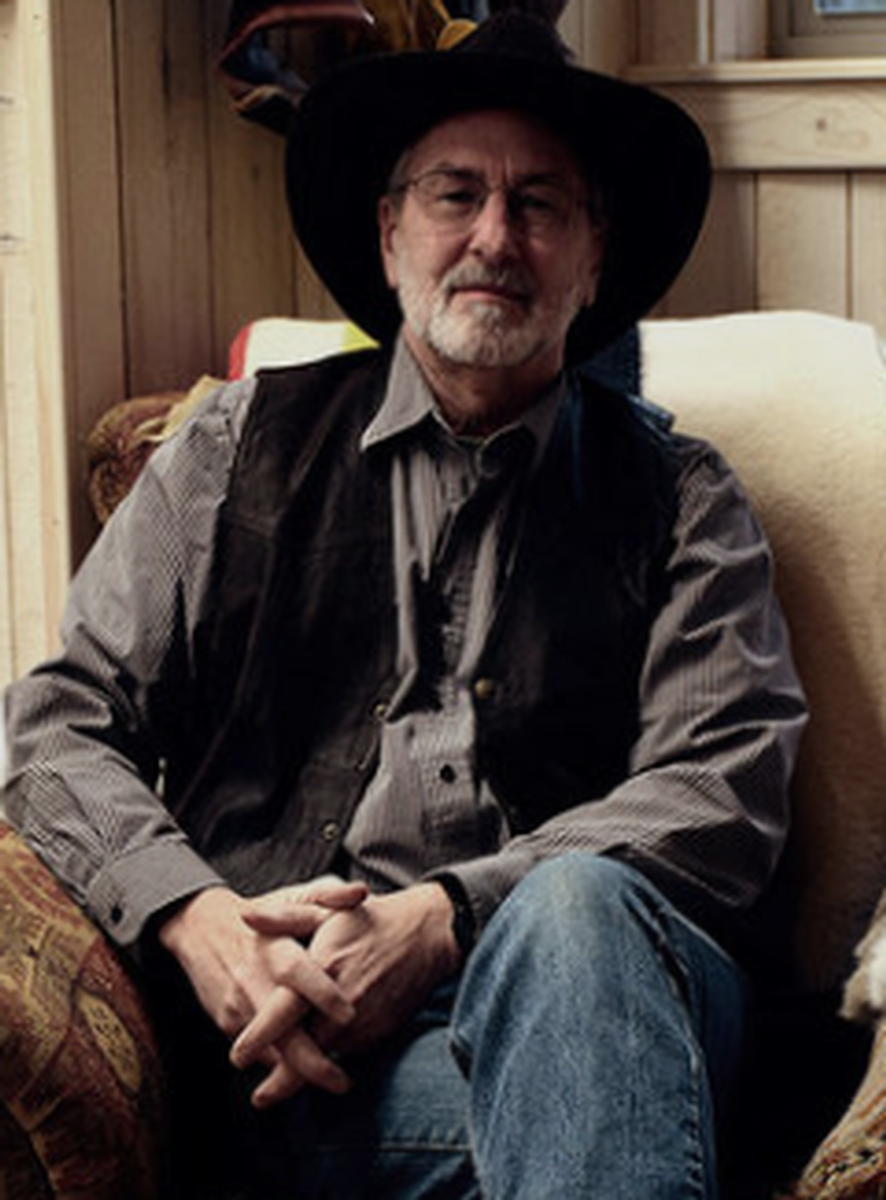 Born and raised in Mankato, Minnesota, Michael’s first passion in life was always art, followed by a serious interest in music. After high school and a brief year of college as an art major, he quit school to give a career as a musician some serious thought and effort. After six years in the music business, he decided to return to his art, and briefly attended the Minneapolis College of Art and Design. He was offered a job as a staff illustrator by a local art director and began working full time in the field of illustration. After a year, Michael relocated with his wife Valerie to the Green Mountains of her native Vermont. In 1977 he opened his first studio and began his full time career as a freelance artist and oil painter working through agents in NYC. Over the next 25 years, he developed a highly successful career and national reputation in the field of illustration. His paintings and drawings became highly sought after by publishers, clients and corporations, and he became a featured guest lecturer and instructor at a large number of art schools, institutions and museums.

“My first career as an illustrator is one that I look back upon with a lot of fondness. The training that it provided was invaluable, and it offered a secure way to support my wife and kids. I was more of an editorial illustrator, in that I had a lot of artistic freedom, and had the chance to tell stories through the movie, book and magazine industries. It eventually opened up a lot of doors for me into the gallery marketplace as well.” During the earlier years when Michael was flourishing as an illustrator, he was also producing a limited number of oil paintings for the gallery and portrait marketplace. In 2002 he saw the need for a change, and left his illustration work behind. Michael became a full time painter in the fine art world and eventually moved out west. Although he has always been equally adept at masterfully handling landscapes, figures, portraits and still lifes, Michael quickly found that painting the characters and history of the old west especially excited him and for the last 12 years this has been his singular focus. He says “The subject of the great American frontier is something that I never grow tired of bringing to life in my paintings. I love the history, the characters, the costuming, the critters and the landscapes, and the ample opportunities that exist to tell a great story. The themes that permeate western art also feel like home to me – faith, family, friends, self reliance and hard work, just to name a few. It’s all there for me. I am eternally grateful that I can make a living doing what I love.” He began to sell his work through several prestigious western galleries, and eventually earned his place in several museum shows and auctions including: Prix De West, Quest For The West, the C. M. Russell Museum annual show and auction, the Buffalo Bill Art Show, the CDA Auction, the Scottsdale Art Auction and Cowboy Crossings (beginning in 2017). Among his many lifetime awards, his most recent include the following: the “Spirit of the Buffalo Bill Art Show and Sale Award” 2016; the Quest for the West the “Patron’s Choice Award” in 2015 and the “Artist’s Choice Award” in 2014, 2015 and 2016; and the “Best Oil/Acrylic Painting of Show” at The Traveling West Art Show, Southwest Galleries in Dallas TX, in 2015. He and his work have been featured in numerous publications including Art of the West, Southwest Art, Western Art Collector, American Artist, The Artists Magazine and Step By Step Graphics. Hundreds of collectors and corporations have his paintings in their permanent collections, as well as The Booth Museum of Western Art and the Pearce Western Art Museum. He was selected by the C. M. Russell Museum to become a member of the “Russell Skull Society of Artists” in 2014. A true highlight in Michael’s career was the invitation in October of 2016 to become a member of Cowboy Artists of America.

Michael has always enjoyed “giving back” to the field that he has been a part of, and to that end over the years he has conducted a large number of oil painting workshops. In 2012 he published a new book, a limited first edition of 300, "C. Michael Dudash - Western Collection", showcasing 87 paintings. “I have always been interested in well executed and beautifully designed oil painting, no matter what the venue, style or label.” Michael says. “The challenge for me as a painter is to take the subject of the old western frontier and create works of art that are moving, beautiful, timeless and universal in their appeal. As for me, I have to daily rely on the good Lord and His inspiration to help me accomplish this formidable task.”

As with most artists, Michael is incredibly passionate about his life’s work, but he does allow himself time to pursue his equally passionate commitment to his guitar/mandolin playing, Christian ministry, and his family. He lives with his wife Valerie, and currently works out of his home and studio in the Coeur d’Alene, ID area. To learn more about Michael’s art and his career, visit his website at: www.cmdudash.com 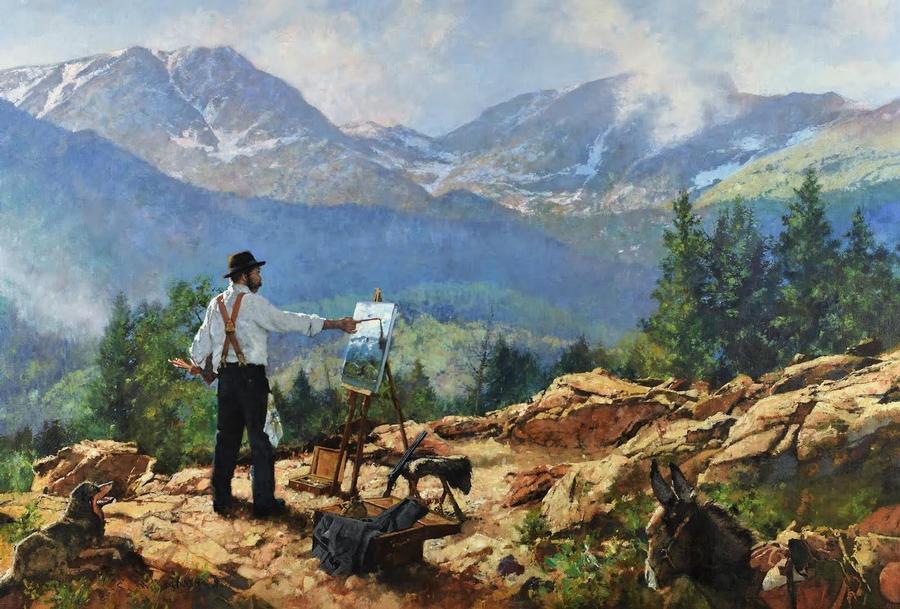 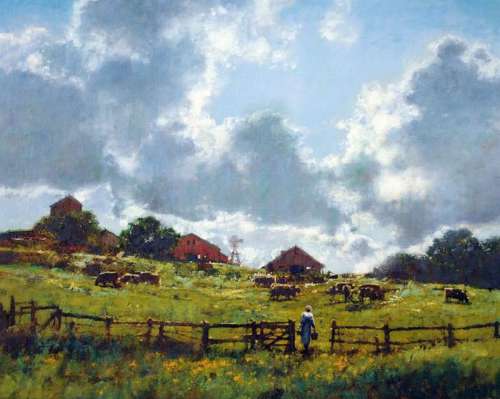 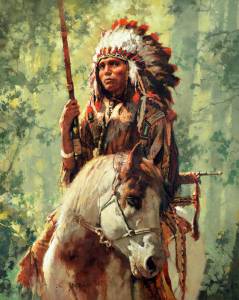 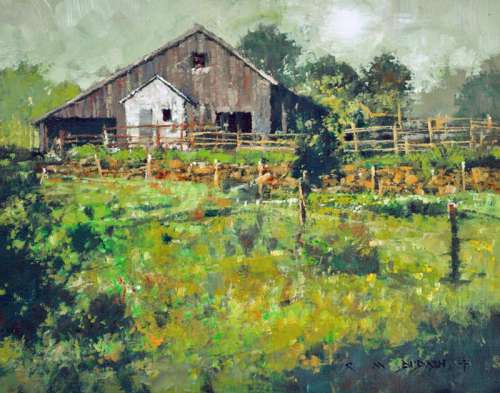 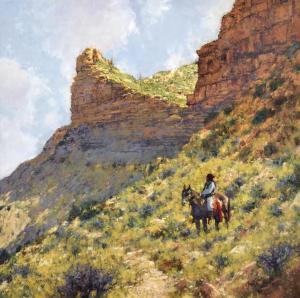 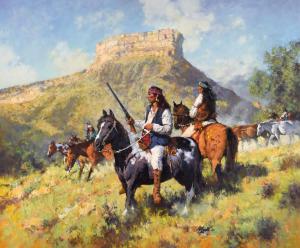 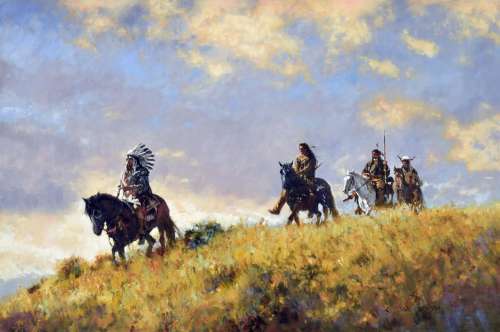 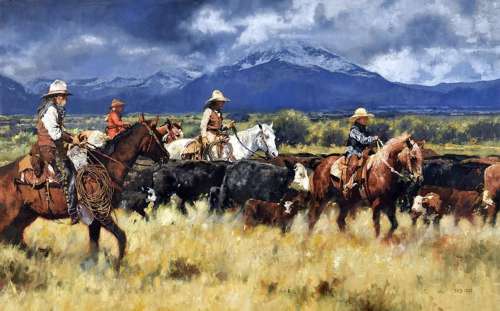 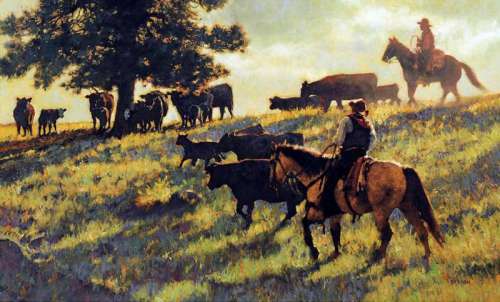 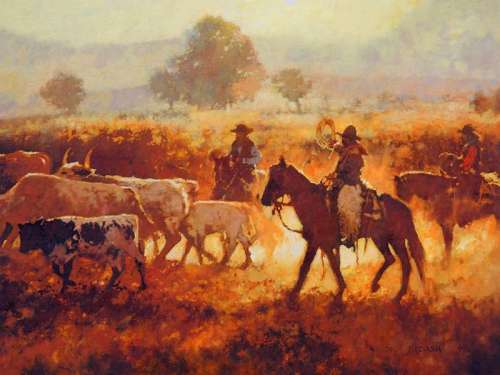 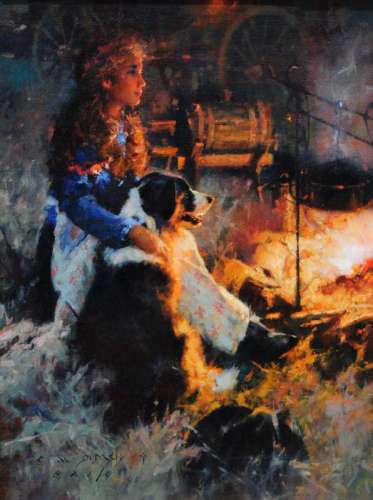 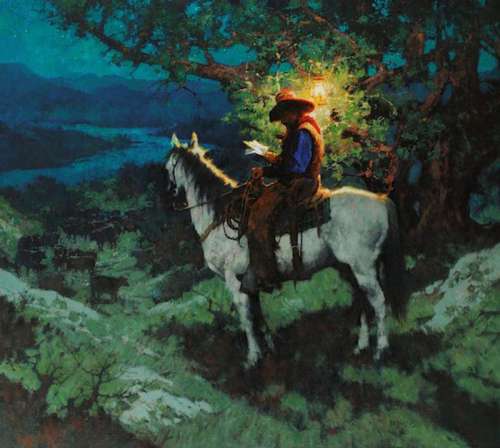 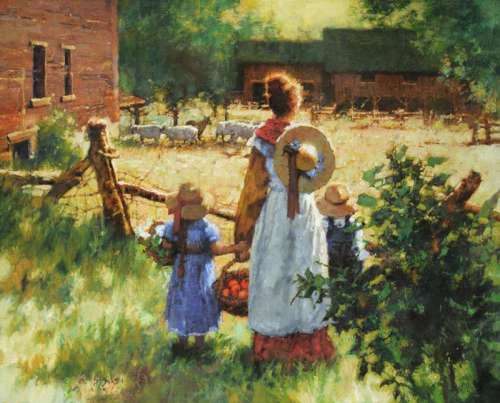 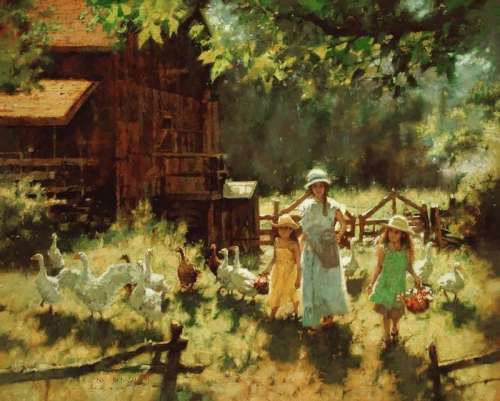 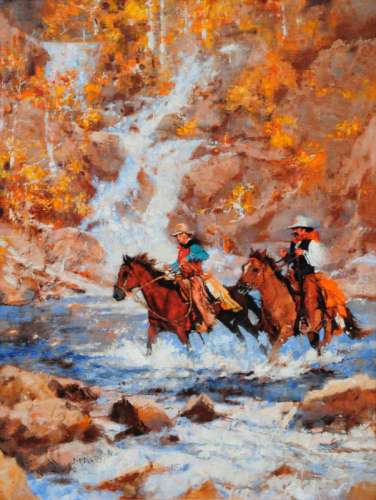 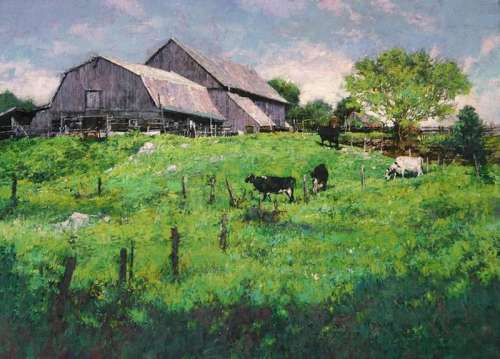 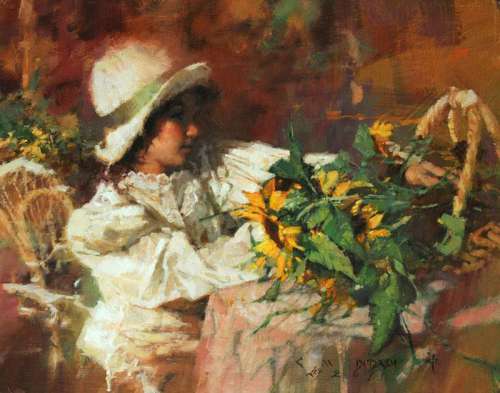 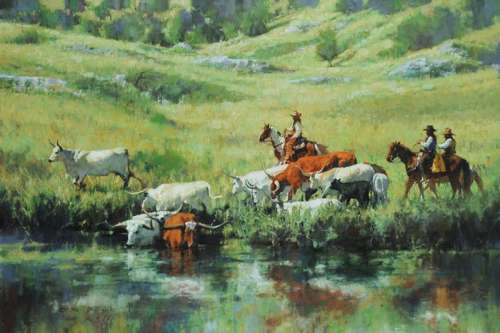 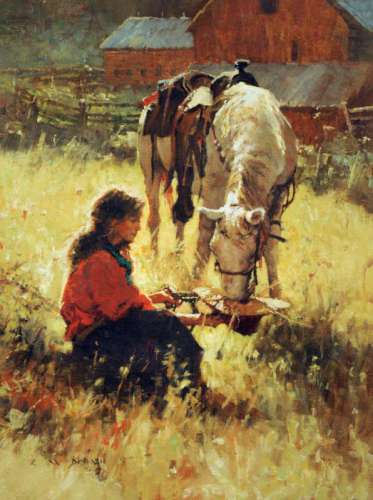 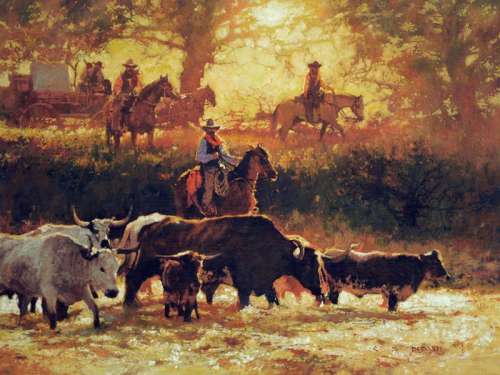 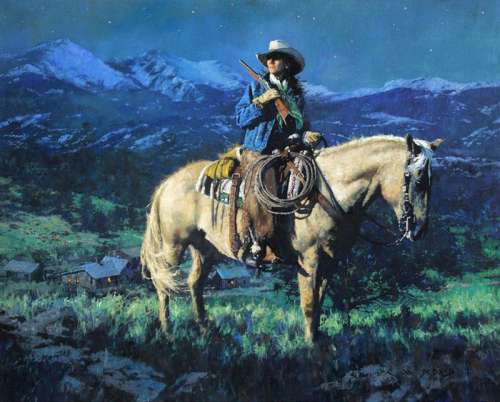