Charles Marion Russell (1894-1926) Charles Marion Russell is a legendary painter and sculptor of the American West. Born in St. Louis in 1864, he was fascinated with western life from an early age, listening to stories told by his Grandmother of her brothers’ adventures on the frontier. His father realized early on that Russell would never be interested in the family business, nor was he interested in school. So at 16, Russell was given a trip out West to Helena, Montana. The father thought that rough and tough realities of the West would shake romantic notions of it out of the boy's head. But instead, Russell became even more enamored with the environment.

In the spring of 1881, he signed up with the Judith Ranch, where he stayed for eleven years learning the cowboy's life. He continued to paint and draw. Besides depicting life on the range, he also became enthralled with Indian life. For a while, he lived with the Blood tribe in Canada, a branch of the Blackfoot Nation. There he witnessed in depth ceremonies and traditions of a fascinating people. His first national exposure came from one of his sketches appearing in Harper's Weekly in 1888.

It was not until fall, 1896, that he pursued art as a serious career. That year he married Nancy Cooper and the couple moved to Great Falls, Montana. They didn't find people interested in cowboy and Indian paintings, so they began to look for commissions back east. Nancy was an excellent business manager of her husband's art and very soon they were making a very good living from his paintings.

In 1898, Russell cast his first bronzes at the Roman Bronze Works foundry in New York. They were small items but sold well. By 1903, Russell had a national reputation, selling paintings on trips to New York, establishing his bronzes with Tiffany and many commissions for illustrations. In 1911, Russell had his first important one-man show in New York, at the Folsom Gallery. That same year, he was commissioned by the State of Montana to do a mural for the Montana House of Representatives. 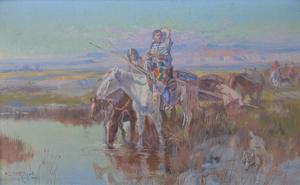