Birger Sandzen (1871-1954) Born in Sweden, Sven Sandzen had a long distinguished career as an art professor at Bethany College in Lindsborg, Kansas and as an impressionist landscape painter.

He was the son of a Lutheran minister and received his art education in Europe, graduating in 1890 from the College of Skara in Sweden and then taking further study at the University of Lund. In 1894 he was accepted into a class in Paris taught by Aman-Jean, who shared a studio with Georges Seurat. There Sandzen was introduced to pointillism and impressionism which he used in his work from then until about 1910.

While in Paris, he applied for an opening at Bethany College in Lindsborg, Kansas. He accepted the position and emigrated to Kansas where he taught for 52 years until he retired in 1946. Not only did he paint in the West including Yellowstone National Park in 1930, he amassed a personal collection of over 500 western paintings and drawings.

In 1916, he first went to Colorado and in the mid 1920s, taught some classes at the Broadmore Hotel. He also taught at Denver College and at Utah State College. From 1918, he became a regular visitor to Santa Fe and Taos, New Mexico, and in 1922, exhibited with the Taos Society of Artists in New York. During the Depression, he was a W.P.A. artist and wrote a book titled, With Brush and Pencil. 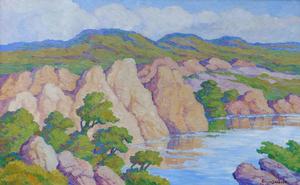